I’ve no idea who Mary Jane was, nor if she wore this style of footwear. The necessity for making something as adorable as these arose when another friend of mine had a baby, so I’ve a  mini-make to show off… Cute, aren’t they? 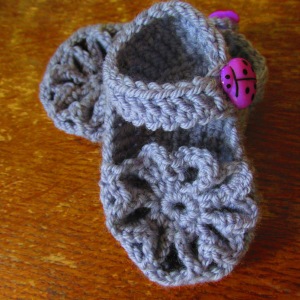 The new arrival is Carolin, and hopefully she won’t be as fussy as Emily (recipient of the pompom blanket from the post, Half A Mermaid). Emily apparently doesn’t like wearing anything on her feet or head, so that rules out some of the sweetest patterns.

These booties were designed by Vita Apala, and the pattern appeared in issue 34 of Inside Crochet (October 2012)