Nature is a common theme from which designers draw inspiration.  Browsing some recent magazines, I noticed several people citing the natural world as their muse, whilst others named patterns after natural elements, whether a “gnarled bark” beret or a “birchwood” cowl.  Floral corsages or brooches are popular too, and the cover of a recent Inside Crochet magazine encourages readers to “Go botanical with our latest floral designs”. 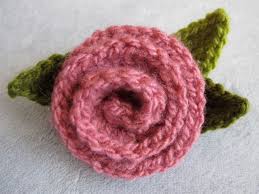 This is by no means a modern trend.  An exhibition at the GardenMuseum (which ended last month – this post has been a long time in coming!)  showed how fashion over the centuries has copied nature and, intriguingly, how horticulture has sometimes emulated clothing.  Embroidery had an impact on gardening in the late 16th and early 17th centuries, particularly in Europe when the craze for intaglio took hold in the gardens of the elite. Evergreens such as box, hyssop and thyme were tightly clipped to form elaborate scrolls and knots which were very similar to those found edging clothes. The parterre de broderie literally means the embroidered parterre, and was pure pattern-work, involving no flowers.  The English, however, seemed keener to include blooms among these intricate loops and whorls. 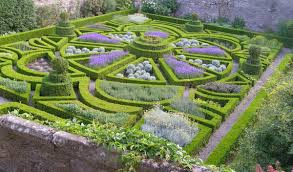 Botanical realism was much more a focus in British clothing than in France and the rest of Europe, where depictions of plants were often stylized.  Around the time that Herbals were being printed, flowers started featuring on British clothing. They were a common motif throughout the reign of Queen Elizabeth 1st and until the death of her successor King James 1st.  Hedgerow blossom appeared alongside imported newbies, from honeysuckle and pansies to tulips (originally from Turkey) and African marigolds.

The enthusiasm for floriferous decoration may have diminished for a while, but returned in the 18th century. During the period between 1720 and the early 1760s, when dress styles remained static, it was through patterns woven into fabric that fashionable variety was created.  Silk weavers based around Spitalfields, for instance, endevoured to provide new designs each year, and floral motifs were a recurrent theme.  Anna Maria Garthwaite and other successful designers even joined botanical societies and were able to view the latest species arriving on our shores.  No real surprise, then, that one of London’s biggest nurseries was situated next to Spitalfields.  Whilst Capability Brown’s stark landscape style came to dominate garden design, nurserymen courted the dressmaker’s interest, and a rare anemone was equally likely to be snapped up for the loom or needle as for horticultural use.

In the 19th century, Victorian innovation meant that colour became more vibrant, both in horticulture and fashion.  Technological advances in heating and glazing were instrumental in the mania for carpet bedding; half-hardy perennials, usually unsuited to our climate, could be started off early in the season and planted out en masse in garish patterns when the threat of frost had passed.  Bedding schemes changes yearly so gardens could change their clothes, so to speak, as often as a lady changed her wardrobe.  Meanwhile, a similar eruption of colour in fashion occurred as chemists discovered how to intensify hues and developed synthetic dyes.  A new language of colour emerged with Michael Chevreal’s formulation of the Colour Wheel, still in use today.  This classification of colour according to whether they harmonised or clashed was applicable in fashion and gardens alike.  In 1861, the article ‘Colour in Dress, Furniture and Gardens’  was publishes in the Englishwaman’s Domestic Magazine,  which explained colour theory and how to use it.

Eventually this fervour for vivid tones subsided due to a snobbish reaction to its prevalence.  Public parks created by philanthropists for the benefit of the poor meant that bedding schemes originating in wealthy gardens were now for the ordinary public to appreciate.  Likewise, cheap dyes became more readily available so bold colours were no longer the prerogative of the elite.  By the 1870s, more sedate hues created a soft haze in the herbaceous borders and, in clothing, white became a status colour.  It showed up dirt, so indicated the wearer was not a labourer.

Returning to the present day..  I’m looking forward to the completion of the Suffolk Collection by knit and hookwear designer Joanne Scrace.  The basis for stitch patterns and construction is the undulating landscape of East Anglia, and its colours and shapes, the countryside where she was raised and still lives.

Tagged as crochet, crocheted plants, fashion and gardens, Inside Crochet

3 responses to “Inspired by Nature”