Picture this: it’s the height of summer, the sky is dreary, and you’re lost in the coils of a maze.  A knitted maze.  This was the second Saffron Walden Maze Festival, a celebration inspired by the town’s two historic mazes – one, an ancient turf labyrinth, the other a nineteenth century hedge puzzle.

Is there a difference between a labyrinth and a maze?  The two terms are often used interchangeably but they are actually distinct things.  Labyrinths came first, dating back at least four thousand years, and are based on a unicursal design with a single path to the centre.  Mazes are far more recent, appearing about five hundred years ago, and are challenges with dead-ends to confuse and frustrate.

Undoubtedly the most famous labyrinth story is that of the slaying of the Minotaur, a beast who periodically required human sacrifice.  The hero, Theseus, managed to slay this bull-headed monster, finding his way back along the contorted path using yarn given to him by Ariadne, which he’d trailed behind him on his inward journey.  Any clever-clogs amongst us may well be asking why anyone would need such assistance if there was just a single route.  True, but I wonder if any of the victims destined to be gobbled down by the Minotaur would’ve known this.  When confronted with a tortuous path, no map, and in fear of one’s life, really, how logical would anyone be??

The knitted maze I meandered was a maze in the proper sense. It occurred to me that this was an interesting inversion of the Minotaur legend, the yarn becoming the trap rather than an aid to escape. It was an easy enough maze to traverse, even for the likes of me (I’ve been known to get lost in mazes even with a map in hand!) It was no more than hip-high, with lengths of knitted and crocheted pieces sewn together and pegged onto twine strung between bamboo canes. It brought to mind Dr. Who’s scarf if that were to be hung out to dry after laundering. At the centre was another yarn maze, a so-called ‘finger maze’ to be followed with fingertips, worked in eye-boggling colours, the red leaping out of the blue. 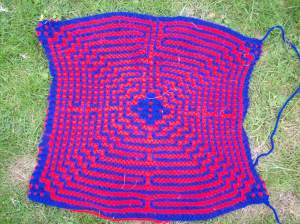 Centre of the maze

Other textile mazes could be found on display at the shop Craft Days, and were the best entries of a competition. One which brought a smile to my face was titled ‘Purple Haze Maze’ but my favourite was the winning entry: ‘Old Wise Oak’ by Ruth Pickering. It had no obvious maze but the tree was gnarled and twisted in a labyrinthine tangle of sinews often seen in ancient trees. Another was titled ‘MM – Mandala Maze’ by Bella Fuerst, a crocheted circle with a maze traced into it using surface stitches. 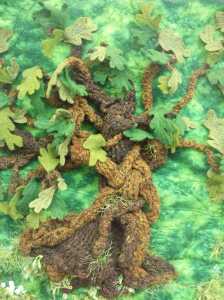 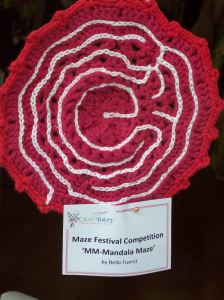 I suppose the most frequent maze that all knitters and hook workers encounter is the ordinary ball of wool. Just think of the tangle that we all get into at some point – a labyrinth of yarn turning each of us into a monster at the centre!

5 responses to “Lost In Yarn”